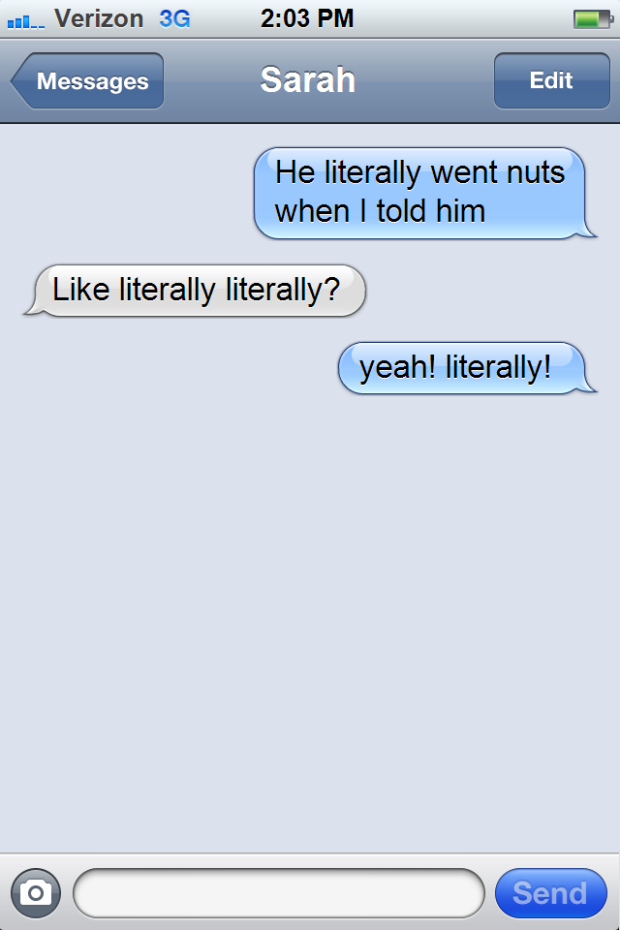 Many complain that people use literally when they mean figuratively, and use that as evidence of the speaker’s alleged stupidity or inability to grasp the meaning of words that they are using.

I think that a more sinister dynamic is at play, one that involves a “linguistic arms-race” of sorts, and like an actual arms-race, is wasteful and undesirable. The basic intuition here is one of signaling, as I explain:

Chapter 1. At time 1, B did something impressive for A. A wanted to encourage B, and so used a rarely used idiom to express the magnificence of this event—“This is… awesome!” Using out-of-vocabulary expression is cognitively costly (which is one possible theory of why poetry is efficient in courtship) and so B infers that A is genuinely impressed. At time 2, C does something impressive for A or B. Now, the cost of retrieving the expression is lower for either A or B, since they just recently heard the expression, but C does not know it, so they can use it more liberally. Some time passes, and now everyone has heard “awesome” used a few times, so they all know that its relative cognitive cost has declined, but as some members of the group have heard/used it more frequently than other members, their relative cost is still lower than anticipated by other members (who only expect average cost), and so they use it more and more liberally, still inspiring some sense of effort in the recipient.

Chapter 2. Now we have a problem, since we have cheapened the cost of “awesome” to such a level where it can be used freely, at almost no cost. Now there are pressures to either find a new expression or modify the existing one, to express some cognitive effort. This is when we would start hearing an expression that no one before had considered using—“This is really awesome!” In the past, adding the “very” would sound awkward (think about the expression “this is really solemn” or “this is really stately”) but now it is inevitable. In fact, just saying “cool,” with no modifier, can be a sign of slight disapproval (“Hey man, I am coming to town this weekend, we should really hang out” to which the answer is “Cool.”)

Chapter 3. Now it is the time of the Puritans to lament the misguided use of words that do not mean what the words “should” mean. But, resistance is futile, the word has been assimilated, and now even the official arbitrators of language deem literally to mean not literally, i.e., figuratively.

Implications? We indirectly made it much more costly to use certain expressions for their intended, original, non-impression conveying sense—“a religious person feels the presence of a holy object truly awesome” or “I literally meant that literally,” where these italicized modifiers would not have been necessary in the past. We made it more difficult to convey impression “this is literally awesome” and we now have to dig deeper into our collective language trove to find impression-conveying expressions. Solution? Governmental regulation. (just kidding, we should just abandon all hope of ever changing this dynamic and embrace it).

P.S. I postulate that the rate at which these dynamics occur (a move between “awesome” to “literally awesome”) is representative of the social cohesion of the unit under investigation. The more people interact, the faster this rate would be.