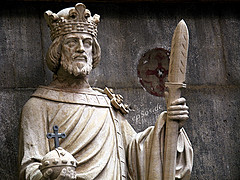 I had an interesting conversation with a friend from Spain. I inquired about the Spanish perception of the monarch tradition, which — to me at least — symbolizes that people are psuedo-biologically different (the so-called bloodline of the monarch), an idea which is antithetical to a liberal society, which is mostly based on the ethos of merit.

He suggested that one of the values of monarchy is its continuity over time, which confers a sense of above-timeness or, as he called it, a “brand” value of monarchy.

In conventional economic theory, there is also the question of why businesses puts up a sign “Est. 1758” (instead of using the advertising space to advertise prices or products). The explanations provided are almost never continuity per se; sure, many people like to experience life as people did three hundred years ago and so may be tempted to purchase a product that is old in heritage, but soon the novelty wears off and if the product is not good, they will not continue to buy it. Instead, putting up such a sign is useful because it signals that the underlying product is so good that people have been continuously buying it for the last three hundred years, so we can infer from the business’ legacy the quality of its product.

Applying this reasoning to monarchy, which is one interpretation of the “brand” argument,  is entirely unpersuasive. Let’s look at a close analogy. Suppose that AIG puts up a big sign “Established 1919”. I doubt anyone would take that as a signal of quality, with the fresh memory in mind of the bailout. AIG’s failure to fail is a product of governmental intervention and not of its wondrous products. Monarchy, similarly, will often fail to fail, so its continuing legacy should not be taken as a strong evidence of its merit.

That leaves enough room for alternative explanations for monarchy, but I think it is useful to remember that the persistence of older institutions more generally does not tell us a lot about their real social value. And as it is not uncommon to argue from legacy (e.g., the common law is good since it has been here forever, banks are necessary because they have always been present in the modern economy, etc.), it is useful to remember that there is a “failure to fail” dynamic at play here.